hide
hide
No announcements have been posted yet for Godalming Swimming Club. 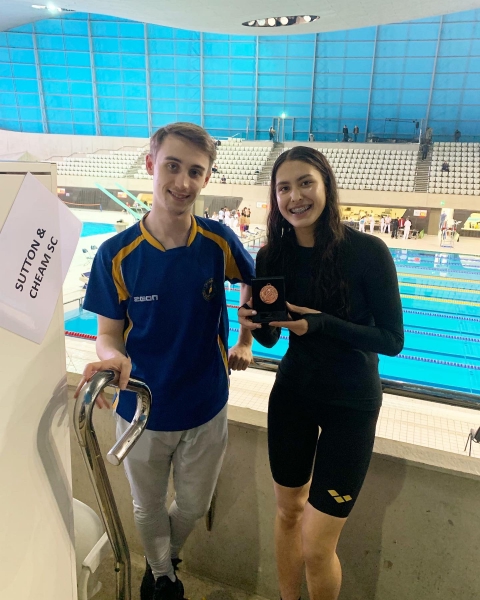 The Surrey County Championships are now complete. We had a really great set of swims with:

And lots of PBs

Well done to everyone who competed and thank you to all the coaches, volunteers and parents for the amazing support. 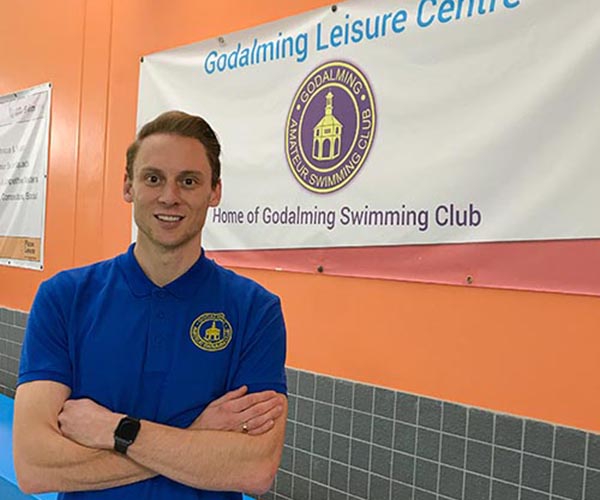 We are very pleased to introduce our new Head Coach – Tom White.

Tom is a former national swimmer and Surrey Captain, Tom represented Haslemere S.C in his youth when he competed at 5 National Championships and Captained Surrey to the Intercounty Championships at Ponds Forge. After taking a break from swimming Tom came back to the pool for a brief spell when he represented Godalming S.C in 2014.

As a Personal Trainer Tom has always enjoyed staying fit, in recent years he has rediscovered his competitive nature and taken to the sport of Triathlon, in which he now represents Team GB Age-group and will be competing at the European and World Championships next year.

Tom is excited to be joining Godalming S.C as Head Coach and sharing his knowledge and experience in the pool to encourage and motivate our swimmers. Tom is looking forward to getting to know all the swimmers and coaching staff and will be taking charge of all Senior squad sessions starting in January 2022.

We would also like to take this opportunity to thank Jon White, who is stepping down as Head Coach after more than 10 years in charge. He has been incredibly dedicated to the club and worked tirelessly supporting swimmers to reach their potential with lots of successes. We are very lucky that Jon will continue to be part of the club going forward continuing to coach and offering advice and support. 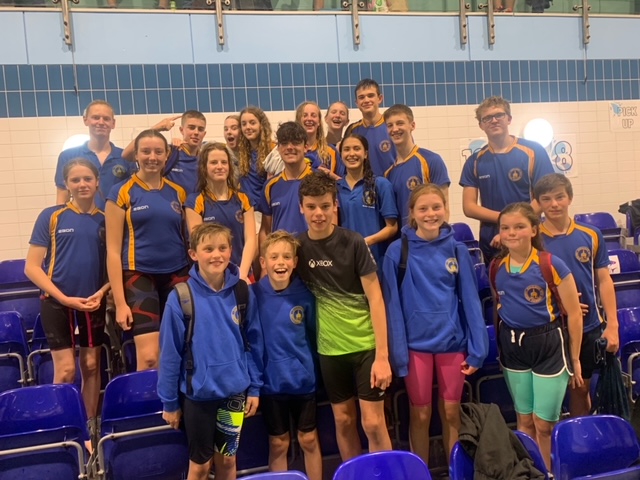 Well done to all those who swam last Saturday. Thank you to the poolside Team and all our supporters

Its was only a small team (due to covid restrictions), but very effective – a BIG well done everyone – many PB’s achieved!
Final placings were: 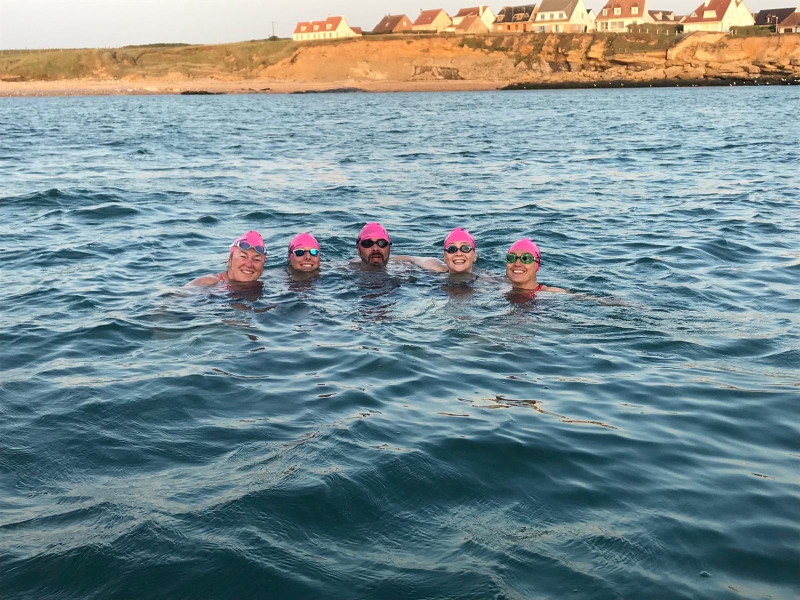 A team of swimmers from GASC have completed their challenge and last weekend swam the channel.

After a tense weekend team S6&D2 arrived in Dover Harbour at midnight on Sunday 12th September. It wasn’t long before our excited, but very nervous team finally met with our pilots, boarded ‘High Hopes’ and waved goodbye to our coach Sissy Gasson (Surrey Open Swim) and calm spotter Dee. The short boat ride to Abbott’s Cliff felt like a lifetime, swapping the calm waters of the harbour for the open sea. Helen Jenkins, with flashing green lights attached to her hat (no, we didn’t wear wetsuits!), swam the short distance to the shore in the dark and at 2.44am the moment we had been waiting so long for had arrived. With the sounding of sirens our swim had officially begun.

The first hour seemed to disappear and it was Grace Kimber’s turn (just 17 years old). Handover one was successfully completed. Kat Kershaw, swim three, was relieved to get off the sea-sick inducing boat and into the water. Hour four belonged to Tony Palmer, who had the pleasure of swimming as the dawn broke. The first rotation was completed by a very patient Hazel Kimber. Our swim order was now fixed, CS&PF rules, and at times this proved challenging as those who suffered from seasickness looked forward to the relief of the water.

Throughout our swim we were skillfully guided and encouraged by our fantastic pilots and official CS&PF observer. They kept a watchful eye on us to check our safety, and the continuous encouragement through regular thumbs up and smiles from the wheelhouse kept us motivated during swims- especially when we could not quite get into the rhythm due to waves.

It quickly become apparent that our relay change overs were paramount in terms of speed and accuracy (not unlike the pool). Every second counted. The swimmer in the water was given a 5 minute warning for the end of their time, an indication to push hard and get ready to swap. The ingoing swimmer received a 30 second countdown. Those last few seconds on the platform seemed to go so slowly, but then it was go, go, go. We had to ensure we were behind the other swimmer, not touch them, but give them space to get out. Once out of the water there was no time to relax, we had to move quickly to get dry and warm. All quite a challenge on a rocking and windswept boat.

Whilst we each had 4 hours rest between swims, we could not believe how quickly the time went, we had had no sleep and little time or space to relax and re-energise. Our priority was to help and encourage each other get ready for each swim both physically and mentally, and to help those getting out of the water warm up.

Hours 12 (Grace) and 13 (Kat) proved to be crucial to our success as the tide was turning and we were entering French territorial waters. Grace and Kat were both asked to give (and gave) their all to get us around the turn of the tide. If they hadn’t, we would have been swept back beyond Cap-Gris-Nez, with the swell and deteriorating weather, and likely to result in failure. Tony and Hazel then pushed hard to ensure we had the French shore in our sights just south of the Cap. We each ended up having 3 swims at 15 hours, with Helen swimming an additional 28 mins to land the swim. We ended on the beach at Pte Du Nid De Corbet, just north of Audresselles at 6:14pm which gave us a time of 15 hours and 28 minutes.

There were three boats out on Monday. S6&D2 and a solo swimmer, who shadowed us, completed the swim. The third boat with a relay team had to withdraw due to the weather conditions. This makes our success more poignant as it wasn’t easy going out there. As a team we pulled together (including with new team members on the day in our crew and observer) and it just goes to show that if you persevere with your training, with a bit of luck on top, you can succeed in your goals.

Huge thanks from all of us to Sissy for coaching us and preparing us for our channel swim and thanks go to all Godalming club coaches who have kept us going in the pool since they re-opened this year.

Also, thanks to the incredible Greg McKenna who inspired us all the way. S6&D2 – Grace, Kat, Hazel, Helen and Tony – September 2021.

The team have raised nearly £40,000 for team member and also swim club member Greg and if anyone would still like to donate the crowdfunding link is: https://www.justgiving.com/crowdfunding/channelforgreg 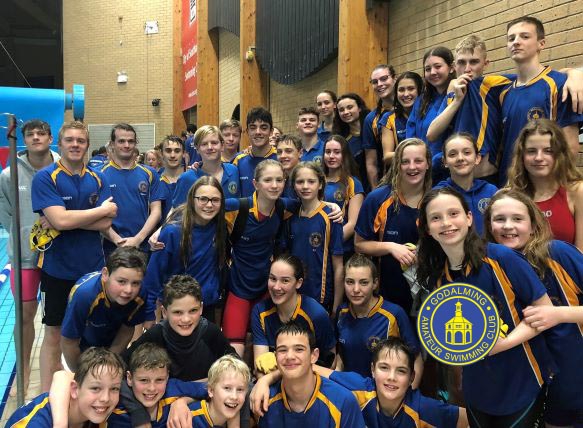 Thank you to everyone that has supported our crowdfunder appeal, we have reached our target of £3,000 and have also been approved for Sport England match funding so will receive 50% of our target in addition to the money raised.

We also need to thank the wonderful local businesses in Godalming including: The Star Inn, Godalming Delights, The Greenhouse, Thyme for Tea and Louise Field Fitness & Nutrition who have supported us and offered brilliant rewards.

There are still some rewards available and the appeal will stay open to end of the month so if anyone hasn’t donated yet we would be incredibly grateful.